Concept for a Soap Opera 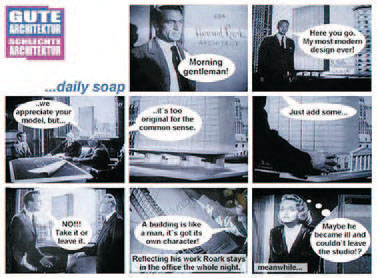 To improve the image of architects in society, a competition was announced aiming to strengthen the media presence of the profession. The very popular soap opera “Gute Zeiten – Schlechte Zeiten” (“Good times, bad times””) was used as a reference.

Structure proposal for a generic daily soap opera about architecture.

Casting: Look-alikes are sought of the actors in German commercial television’s most successful soap opera, “Gute Zeiten – Schlechte Zeiten“ (“Good times, bad times”, RTL, began in 1992) to fill the supporting roles. It is possible that the audience will identify with such successful television characters.

Survey: a television advertising agency carries out a survey of the target group (14 to 24 years old) to find out what objects and furniture should be found in a architect’s office, in the opinion of the respondents. The film studio will then be furnished according to the results, in order to achieve a high level of public acceptance.

Roles in the pilot film: there are only three main roles: the architect’s wife, the bad guy, and the good guy. The architect does not appear, and the role remains unfilled. To improve the image of architects as a profession, we will operate on the strategy of absence. This is like in the American detective series “Colombo” (since 1971, with interruptions), in which Colombo’s wife never appears, even though he constantly talks about her.

The talk of the absent architect is intended to open up the watcher’s potential for projection. This potential can be intensified into the mystical.

Architects’ Tele Lotto: the draw takes place at the end of each show. The architect’s wife presses a button to make a ball roll. Members of the audience have sent in pictures of their dream homes to the producers of the program. One house is allocated to each number from 1 to 35. Good guy puts good architecture next to the even numbers and bad guy gives bad architecture odd numbers. The ball rolls just once per broadcast. The house of the number the ball knocks over is built by an architect chosen by the good or bad guy; that is the first prize in this competition. Consolation prize: if the ball doesn’t knock any number over, all the contestants receive a copy of the book “Architecture without architects.”

For this draw we will use the machine from Tele Lotto (a 30-minute program on East German television, 1972–91), which let one in three balls run through.