“The building is a metaphor for what comes before a building.“ (Mark Wigley)

In the 1970s, the regime in East Germany sought to overcome the lack of consumer goods by obliging every business to develop products for everyday use. The applied technology department of the chemicals plant VEB Spezialchemie Leipzig made a prototype of a near-spherical hut called the “Kugelhaus universal,” which was first shown at the Leipzig Trade Fair in 1971. It was made up of twelve pentagons and hexagons and had a diameter of 4.8 meters and floor space of 13 square meters. According to the instructions that came with it, the house was meant to be assembled by the purchaser.

“The inventors thought they had developed a space age alternative to the garden shed, and their folksy variation was an answer to the ambitious architectural ideas of the time, which inspired the Atomium in Brussels in 1958, the mobile rooms by the Archigramm group in England, Kisho Kurokawa’s capsule architecture in Japan, and the geodesic domes by Buckminster Fuller in the USA.” (Peter Herbstreuth, “Der Himmel über Halle-Neustadt,” Der Tagesspiegel, March 13, 2004, p. 24)

The Soccer World Cup 2006, as a global sporting event, saw a revival of the Kugelhaus. The sponsors presented their transportable architecture in various cities, which used the ball for aggressive city marketing campaigns, as Berlin did with its ball at the Brandenburg Gate. A soccer ball is made up of the same number of hexagonal and pentagonal shapes as the Kugelhaus. 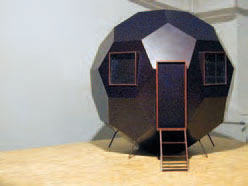 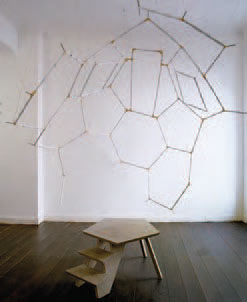 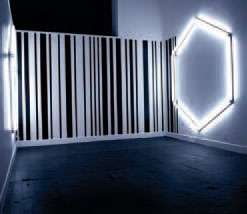